At the start of most civil litigation, a common question from a client may be: “How long will my case take to reach resolution?”  Along with this general question, attorneys and their client may discuss the client’s goals in litigation and how to efficiently reach those goals.  That may involve considering options to resolve litigation as quickly as possible, either through settlement or motion practice.  Clients may need to budget for litigation costs and forecast those expenses overtime.  Further, if a party desires to go to trial, it is worth knowing how long it will take to obtain a verdict. Knowing something about how most cases are resolved generally guides these discussions, and it is thus important to first understand the trajectory of most civil cases in the federal courts.

How Are Cases Resolved?

In 1938, the Federal Rules of Civil Procedure were established combining the courts of law and equity and bringing civil litigation into modernity.  The new rules also shifted the emphasis of litigation from a focus on pleading and trial—primarily by jury—to one that encouraged discovery and private settlement.  This has arguably led to the decrease in the use of trial to adjudicate disputes.  (Galanter 2004, 2005.)  This has happened in part because cases are more likely to settle (Eisenberg and Lanvers 2009) or be resolved on dispositive motions like a motion for summary judgment (Burbank 2004).  As Langbein (2012) states: “Pretrial civil procedure has become nontrial civil procedure.”

However, some scholars have determined that the coding and changes to the coding regime in federal litigation may introduce error and call into question some of the conventional wisdom.  (Eisenberg and Schlanger 2002; Hadfield 2004.)  This seems to be particularly true regarding the spill over of some coding between categories, especially with regard to award amounts and whether a case concluded with a settlement. (Id.)  Yet, this data still provides general insights regarding federal civil litigation across the country over time.  Moreover, more recent data would hopefully suffer from some of the issues created by the changing coding rules from previous decades.

Over the last twenty years, over 5.3 million cases were filed in the federal district courts, excluding multi district cases.  Of those cases, 257,269 or 4.9% are pending and yet to be resolved.  Of the cases that have concluded, we can estimate how long the case was pending, or the case’s life span, by finding the number of days from file date to termination date.  For the cases that were filed since 2000 and terminated, case life spans range from one day to 7,023 days (or over 19 years!). On average, cases were terminated within 344 days, or just shy of one year.

The longest case, spanning almost two decades, was initiated by a habeas corpus (death penalty) petition filed in the Central District of California in June 2001.  Following Eisenberg and Schlanger (2002) and Hadfield (2004), I segregate prisoner petitions and government recovery of overpayment and student loan cases that tend to skew the generalizability of case termination analyses.  Interestingly, prisoner petitions were resolved, on average, within 284 days compared to 360 days otherwise.  Government recovery cases were resolved within 198 days, on average. 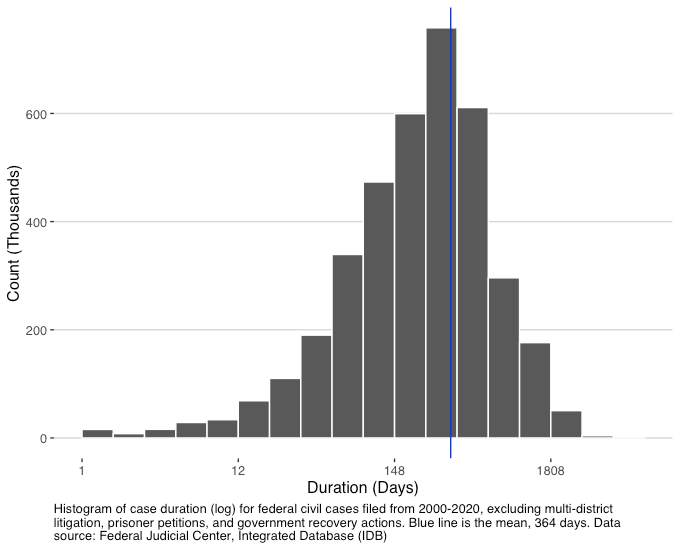 There is also substantial variation between the types of cases filed.  Rent, immigration, arbitration, consumer credit, foreclosure, and copyright cases all have lower case duration averages than many other types of cases.  Bankruptcy appeals (28 U.S.C. §158) also have a lower average case duration at 208 days. The median case duration for rental cases was a speedy 30 days.

Finally, we get to the disposition of each case, or the part of litigation that the parties or attorneys may believe they have the most control in directing.  As conventional wisdom would predict, dismissals based on settlement are the most common disposition, making up 31% of the total.  Trials, both court and jury, make up a tiny percent of the disposition of all cases, 0.3% and 0.8% respectively.  However, as Hadfield (2004) notes, this is likely skewed because our denominator includes too much (e.g. statistical closings).  Yet, for purposes here, we’re interested in the case duration for each disposition on its own rather than a percent of the total.

As one might expect, cases that were remanded to state court and dismissed for lack of jurisdiction have the lowest average case duration.  Cases disposed of by a judgment on motion before trial had a case duration of 444 days.  Cases that were dismissed based on a settlement had a case duration of 455 days.  Although many cases are dismissed through settlement, the case duration for that common disposition can vary substantially from one type of case to another.  For example, other contract actions were dismissed because of settlement within 370 days on average while product liability personal injury cases were dismissed within 1,119 days.  The speed of rental and lease actions is largely due to the fact that the most common disposition is for the case to be remanded to state court.

Obtaining a judgment by directed verdict saw an increase of the average case duration to 617 days or over a year and half.  Cases disposed of through judgments obtained through jury verdict had an average case duration of 771 days and court trial dispositions had the highest average duration at 831 days or over two years.  On average, holding all else equal, obtaining a judgment through court trial adds more than a year and a half to the duration of a case.  For jury trials, it is approximately a year longer.  However, as mentioned above, trials are rare and it is more likely that the case will be dismissed or resolved by pretrial motion in less than a year and half.